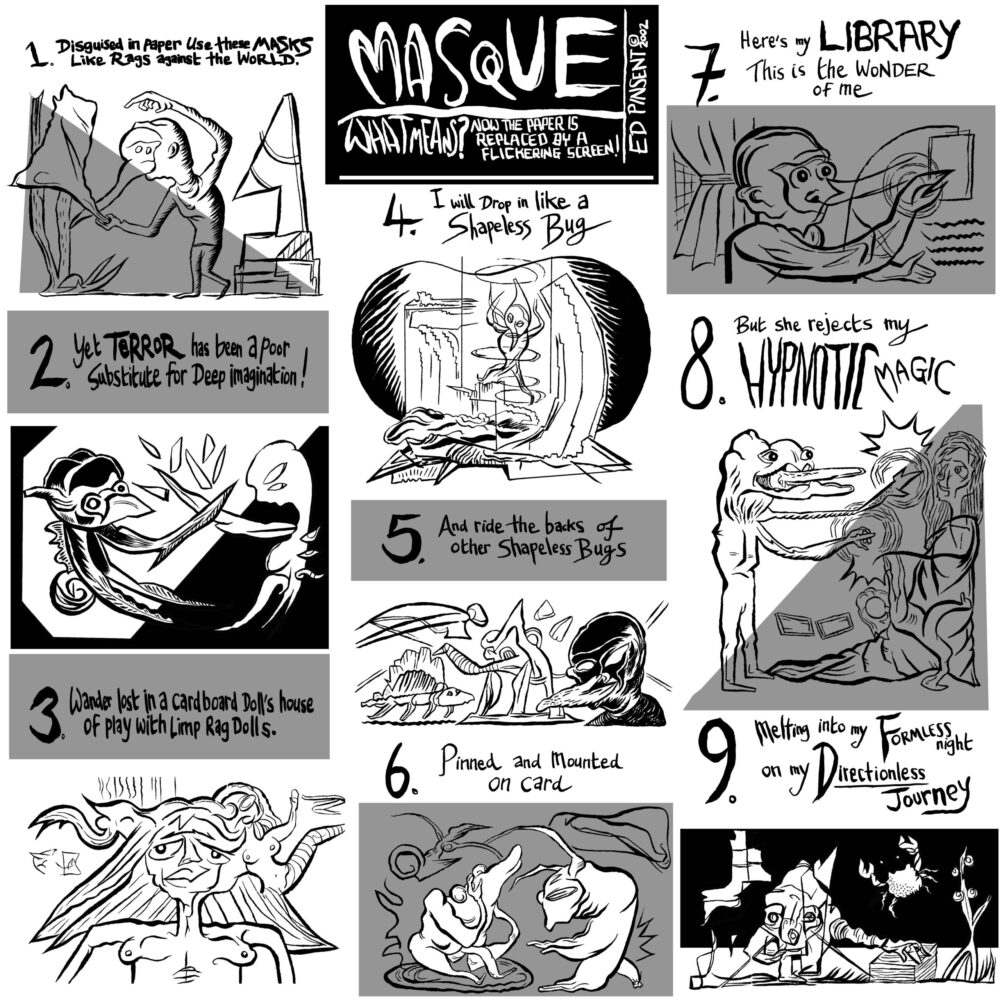 Here is a nine-panel piece called Masque, which was my submission to The Comics Journal Special Edition (Fantagraphics Books Winter 2003), which included a section curated by Paul Gravett as a tribute to Escape magazine. Selected Escape artists were invited to contribute a single page of new work, and the magazine was a square-sized format about the size of an LP cover. This was one of the first pieces I put together inside the computer (it was executed as nine separate drawings), hence the reference to the “flickering screen”.

I’ll admit Masque, in its pseudo-poetic form, is obscure and incomprehensible even by my standards. It may help if you realise it’s not really a single story, but three separate narrative fragments stitched together. Panels 1-3 are something to do with the inadequacy of an artist’s role in a largely indifferent world. Panels 4-6 tell the short tale of the plight of a helpless insect (or a man who imagines he’s as insignificant as an insect). Panels 7-9 depict a librarian or other isolated student, who imagines he can make a woman fall in love with him simply by thinking about it. However, the stories may overlap somewhere; I think it’s likely the woman in panel 3 is making a reappearance in panel 8.

The cut-up nature of Masque extends to the way the drawings were assembled. Many of the panels are created from two or more unconnected sketches pasted together randomly on the page, then inked in to create the illusion of a single drawing. In panel 3, this approach has resulted in a drawing of a doll melting into a drawing of the woman’s hair. The ambiguity of the resulting image suggests we’re seeing two views of the same person, from different vantage points. In panel 8, the same doll/woman figure is now running in a sideways plane, contrary to the other figures in the panel.

It’s possible that the final panel depicts all the main male protagonists – the useless artist, the insect and the lonely librarian – all squashed into a single squat figure. He’s stranded in a surreal nocturnal landscape, with a block of wood under one hand (or possibly a sheaf of paper), a tree, and a flying crab in the sky. The figure floating to his left is a map to an unknown land, hence the reference to his “directionless journey”.