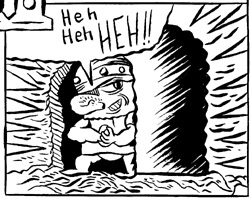 This is an incomplete catalogue of the small press comics work of Ed Pinsent, covering the period 1982-2001.

PART 1: The main catalogue details each individual story, arranged chronologically. This gives you the title of every story I wrote and drew between 1982 and 1999, plus its length in pages and the publication it appeared in. Where there’s a regular character or story theme, this appears in the ‘Keyword’ column. The Year refers to the year the work was drawn. Additional info in notes refers to collaborators and other points of interest.

PART 2: comics published by Ed Pinsent. This is an inventory of every comic I published between 1982 and 2001. It includes those issues of Fast Fiction which I edited (from issue 12 onward). Two comics were previously published on the web.

PART 3: appearances by Ed Pinsent. This lists appearances of my work in other magazines, comics and mini-comics, arranged by year of publication, between 1983 and 1997. All published in England, with the exception of Fox Comics (Australia), Honk (USA) and Sortez La Chienne (France).