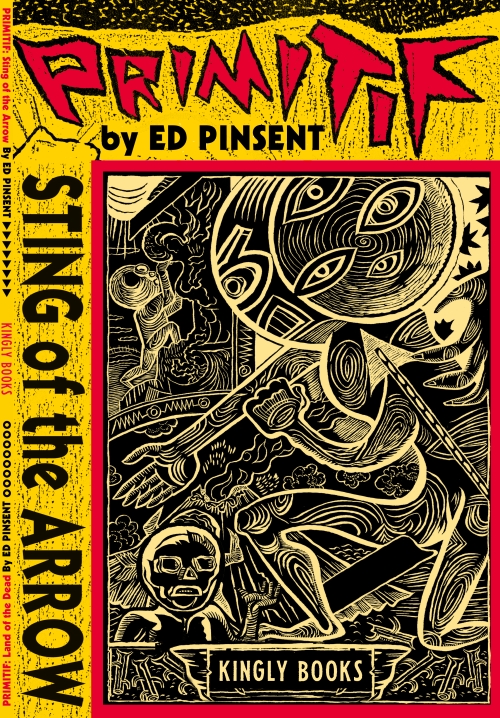 Sting of the Arrow / Land of the Dead

Two full-length Primitif stories. Sting of the Arrow is portrait format, Land of the Dead (originally drawn in full colour) in landscape format. Published in 2006 by Kingly Books, ISBN 0953163970. 74pp perfect-bound paperback with two full-colour covers. Click in gallery below for sample pages.

“Primitif is anything but primitive. ‘Magpie-fashion’, Britain’s Ed Pinsent borrows facets from various cultures, continents and ages and adapts them into a brand of potent myth-making, resonant with symbolism and meaning and uniquely his own. His mysterious, mud-masked warrior and tribal leader, short, tough, impulsive, has been absent from comics for too long, some 15 years, so it’s a delight to find not one, but two unseen tales in this double-covered book. Land Of The Dead dates from 1990-1, originally illustrated in rich coloured crayons and aimed at the French market. Sting Of The Arrow composed in 2003 shows Ed’s mature style in strong, strident graphics and dark, troubling themes. Avoiding world balloons, using captions and frames that appear carved from stone or wood, Pinsent taps into the primal storytelling urges that drove our ancestors.” – PAUL GRAVETT

“Marc Baines’s adventurous Kingly imprint issued Ed’s Voice Of The Wilberforce back in ’03, and now Ed’s back, perfect bind-style, with this double-header concerning the Primitif character whose image is rooted in the Papuan mudmen – Mexican magical books (as pilfered by The Flying Lizards for various record sleeves) were another influence on Pinsent, who happily admits to pillaging different cultural sources in a manner at which academics would emit horrified shrieks.

“The format of this book is a real pleasure : the Sting Of The Arrow tale is portrait, bound at the left conventional-fashion. Flip the paperback over and rotate it anti-clockwise ninety degrees, and lo and behold, you have Ed’s Land Of The Dead story, landscape and with the binding along the top. Dividing the two sections at a midwayish point are some notes by Ed, outlining the 1983-onwards history of his mask-wearing, boar-hunting character.

“Sting…, with its straightforward b&w appearance (outlines, solid black, some shading) dates from 2003/4, whilst its thirteen years older counterpart was in colour (ink drawing filled in using water-soluble crayons, bringing out the paper’s grain to great effect) and has been half-toned-b&w-versioned for its Kingly publication. There’s a gorgeous contrast between the two. Each drawing has a caption, unlike with the Wilberforce strips in which trad speech bubbles are employed. The text of the newer story is sparse and spare, pared down to bare bones-level, with events often described in two or three-word phrases, almost as though Ed’s haltingly interpreting symbol-pictures left behind by an ancient civilisation. The more fluid prose of …Dead could quite easily stand alone, divorced from its artwork. In that episode, death is the great unknown – as much in Primitif’s time (whenever that is) as now. The sight of a boar’s carcass filled with dead insects troubles Primitif, has skeletons invading his dreams and him pondering the great mystery. Having entered the mountainside tomb of a legendary mighty warrior, he examines the bones within, imagining Feroce’s great stature. The skeleton comes alive, inviting Primitif to share its resting-place coffin. Will Primitif be buried with his mask on, with his weapons, or encased in stone ? How will it be when it’s his turn ? Surviving decapitation, having angered Feroce (even he had to submit to death), Primitif’s re-joined-together self carries the warrior’s skull back to his village, a confirmation of the truth of the myth.

“In Sting…, Primitif, now a chieftain, presides over a village in which things are going wrong – a stream’s dammed, crops fail, livestock dies. It’s a story of the pressures of being in a position of power : Primitif is, “Weighed down by robes, chains and ceremonial arms…”, and by a crown which semi-conceals his mask – and by extension his previous warrior identity. Threats loom large – of unpopularity, betrayal, conspiracy, being undermined : “Are his allies truly on his side ?” His landscape is one inhabited by jaguars, insects and serpents, and at one point he disappears inside a volcano. Decorative page borders and inter-frame spaces add an extra dimension to an already rich visual feast which has these pages simply sparkling.” – STEPHEN DRENNAN, Bypass