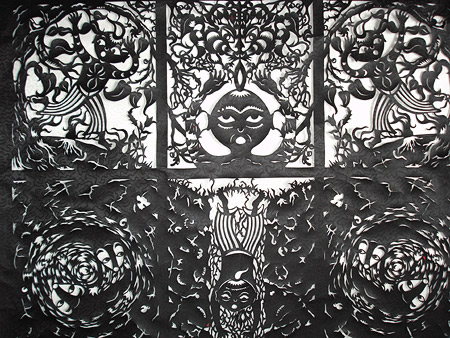 To our great delight we were recently contacted by Tim Budden who got in touch by email from Taiwan. In the 1980s, this Welsh artist contributed his extraordinary badger stories to issues of The Wimp, which he co-published with Mike Hemsley and other art school friends, sometimes working under the alias of T.N. Neddub. He also contributed to Escape and Fast Fiction. Using the figure of Brock The Badger (which could be read as an alter-ego), Budden created strange rural visions of a life beneath the ground, where the activities of the badger community seemed to connect to long-forgotten and semi-magical burial rites. They often got the better of the human beings who wanted to kill them and stuff their bodies. The stories, and the unusual way they were told, have puzzled me to this day, but what’s also striking is Tim’s powerful black and white artwork, and the strong patterns he could make from arrangements of the badgers’ pelts. Since his distinctive work never appeared on the covers of The Wimp, I have reproduced (with his permission) some examples for Budden’s page on this website. Now let’s hear from the man himself and what he’s doing now:

“I spent many years being a teacher and a non-artist. I realised that that was due to some kind of cultural dislocation. I couldn’t find a connection between my art and Taiwanese culture, then I discovered paper cutting and since then have produced numerous cuts using a kind of silk paper. It has a graphic and sculptural quality I really like plus it is all about story telling. So for the last 4 years I’ve slowly rediscovered the artist in me and have a website, which is about to be updated big time and a blog.”

“The badgers are there still, but nobody is sure what a badger is here, which makes Brock’s role more difficult. Even North Americans are confused. The North American badger is a real mangy looking nasty beast – more like a rat weasel than the gentlemanly badger I grew up with in the UK. I have a new character called Daniel, a cherubic curious asexual child. In Taoist philosophy the innocent child is seen as embodying the best way to experience the world – curiosity unencumbered by indoctrination – a pure openness coupled with playfulness. Since following this path of working I’ve been working up to producing a longer cartoon strip called Lost in Forest Wild. It is a work in progress and bits of it can be seen on my blog.”

“As to the history of The Wimp, I remember the high point was when the National Library of Wales asked for copies and gave us an ISBN number. For me the whole Wimp FF Escape thing is still important. Last year I even got a fan letter from a guy in Kent who told me how moved he was by the badger tales, so much so that he became a wildlife officer in Kent. Every time he picks up dead badger roadkill he always pauses for a moment and thinks of Badger Tales and Brock!”