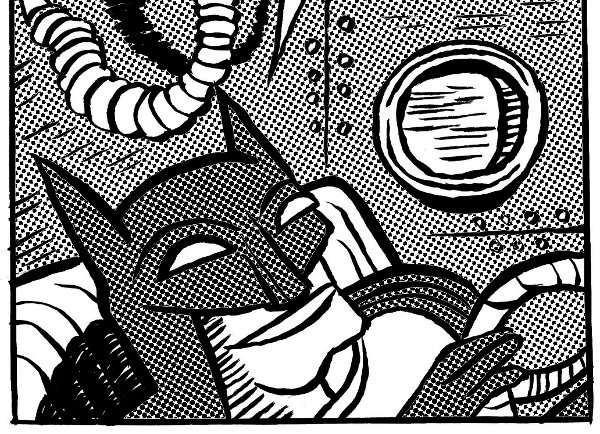 Here’s a PDF of a new Illegal Batman story which I wrote and drew this summer. Batman copyright and trademarks are owned by Warner Brothers and DC Comics. Illegal Batman in the Moon was written and drawn by Ed Pinsent in August 2011 and is a work of fan art offered free of charge to my readers. Please direct any questions to the artist.

Some feedback received so far:

“Brilliant! Thanks Ed, not only did I enjoy that immensely but feel very privileged to be sent it before it’s posted publicly. Also, I don’t think I ever wrote to you to thank you for giving me a copy of Primitif at the Comiket last November. If I did, forgive me for repeating myself, but that really “clicked” with me, I guess that’s not surprising as I’ve done stuff with a similar prehistoric/primordial content. Great art style, with a real sense of that sort of permanence and barbaric power that very early examples of art and writing seem to exude. Sort of like Beanworld without the tweeness? Apologies if that’s an annoying comparison.” (John Miers)

“I’ve got it. This is really good. Pleased Illegal Batman got his inhabited moon in the end! And the use of Bat-stuff is fantastic. The pointers showing the gantry etc. and “I’ll land in a certain zone”. As I’ve probably said before Batman kind of dropped away for me after the Year One stuff because then they took that as the new template and now unfortunately I haven’t read a current Batman for many years. I did re-read the Steve Engelhart and Marshall Rogers run with Hugo Strange from the late 70’s the other day. Have you been watching the Adam West re-runs on ITV4? I wondered, ‘Is it retarded to like the same programme I did when I was six?’ – but it is great and you’d never guess it was nearly 50 years old. I think there’s a case for the US government to step in and say to DC comics, ‘Batman’s far too important to have mere publishers in control. We’re nationalising it and putting Ed Pinsent in charge.'” (Chris Reynolds)

“Hi Ed – this is beautiful! Another masterpiece. Let me know when it’s available in some public form, and I’ll spread the word.” (Dylan Horrocks)

“I read it. I really enjoyed it, it did weird things to my brain, and it has a lot of humour. A pleasure to read. Thanks.” (Luke Walsh)