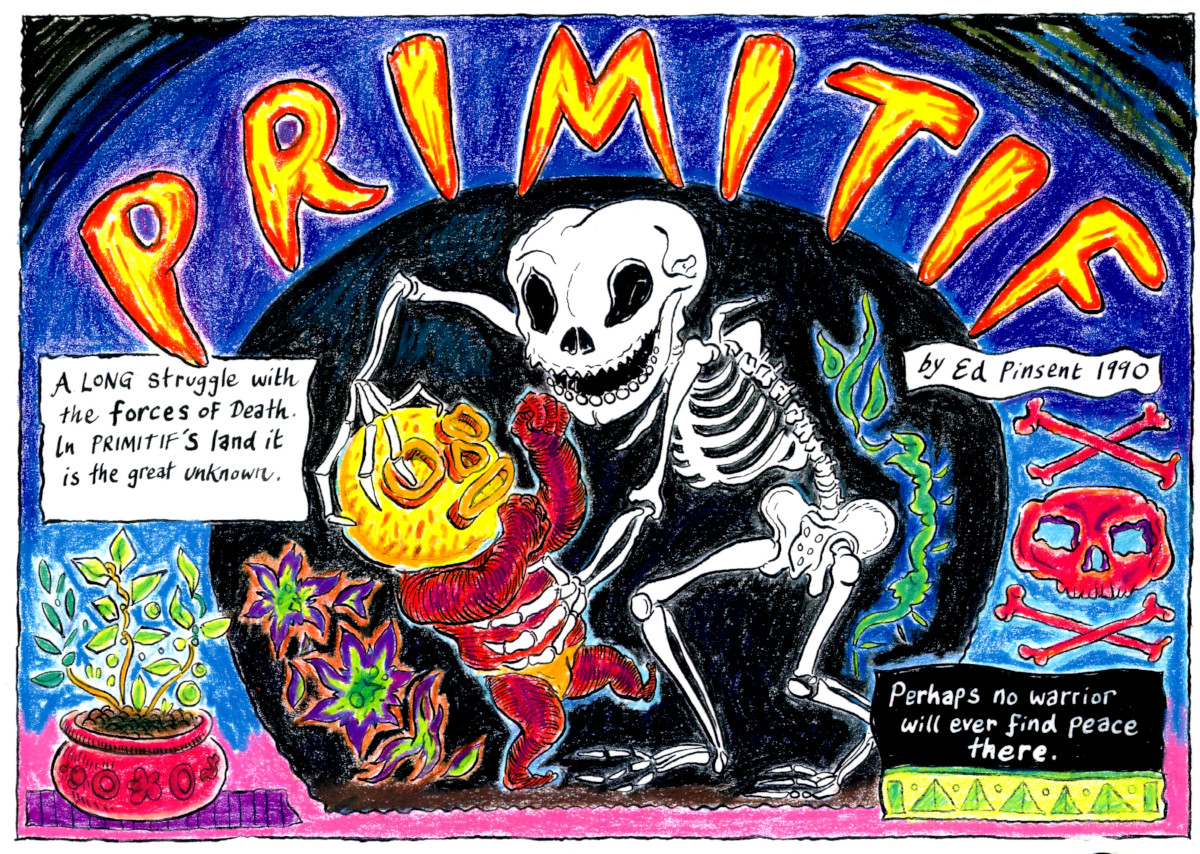 Here you may download a PDF of this story in full colour.

Primitif In The Land Of The Dead (65 MB)

Primitif in The Land of the Dead was written and drawn in 1990-1991. It was the first time I tried drawing a story for this character in full colour; the second was the Revenge Mask story. Where Revenge Mask involved a lot of separate pieces of artwork, each page of Land of the Dead was drawn on a single piece of cartridge paper. I did the ink outlines first, then “coloured in” with my Caran D’Ache crayons. The Prismalo and Neocolor crayons are both water-soluble, so I blended the colours with a little bit of water and a brush. So you get, I hope, a nice mix of textures and effects.

The story follows our hunter hero as he develops yet another inexplicable fixation about the meaning of everything, this time about death and the afterlife; it begins with an image of corruption, dead insects mysteriously found inside the body of a wild boar. He delves into the village history, and his own memories, to make discoveries about a great ancestor named Feroce, and a burial chamber far away from home.

The images and ideas for this story are borrowed from many sources. At the time I had an interest in visiting ancient stone monuments in the UK, including burial chambers; the chambered long barrow Wayland’s Smithy in Oxon is one of these, and it inspired the drawings of the tomb in Primitif.

When he opens the tomb, Primitif finds the bones of Feroce wrapped in red rags; this detail came to me from a Bishop’s burial place which I saw on one of my many visits to English parish churches around this time. For the life of me I can’t remember the Diocese, the church, or the name of the Bishop; all I remember is the red rags.

There are multiple drawings of skeletons and skulls in the story. This allowed me to reconnect, however vaguely, with what I consider to be one of the origins of this Primitif character, the King Penguin book Magic Books from Mexico (Burland, 1953), a book which was on the shelf in our family home at Liverpool. In my superficial manner, I had no interest in understanding the symbolism and language of these codices, but I liked the layouts and directness of the images. Mexico is also home to the Day of the Dead festivals with their papier-mache skulls painted in bright colours.

The moment of darkness as the lid of the tomb closes in on Primitif is intended as my version of a painting by Mark Rothko. Rothko is probably my favourite modernist; I don’t say all his paintings are about death, but many interpretations see them as portals onto another plane, another world, which fits my story.

The “black wine” might be hemlock or some other poison, or just a symbol for willingly accepting death. I took this phrase directly from a song by Alan Price, on his album Between Today and Yesterday (Warner Bros K 56032, 1974); “please let me drink black wine…I know it’s the ending”, runs the lyric.

The story has never been published in full colour until now. In 2006, I produced a black-and-white version of it for a book published by Marc Baines for his Kingly Books imprint. We printed in sideways, along with a newer story called Sting of the Arrow. We took the book to a New York comics festival soon after that, and manned a stall over two or three days; Marc, John Bagnall and myself were making a bid at commercial acceptance. Kingly Books made a good effort on my behalf. I’m glad to have got the story into print, even it suffered a bit from being printed in grey halftones.

The Kingly Books paperback is still available from me.