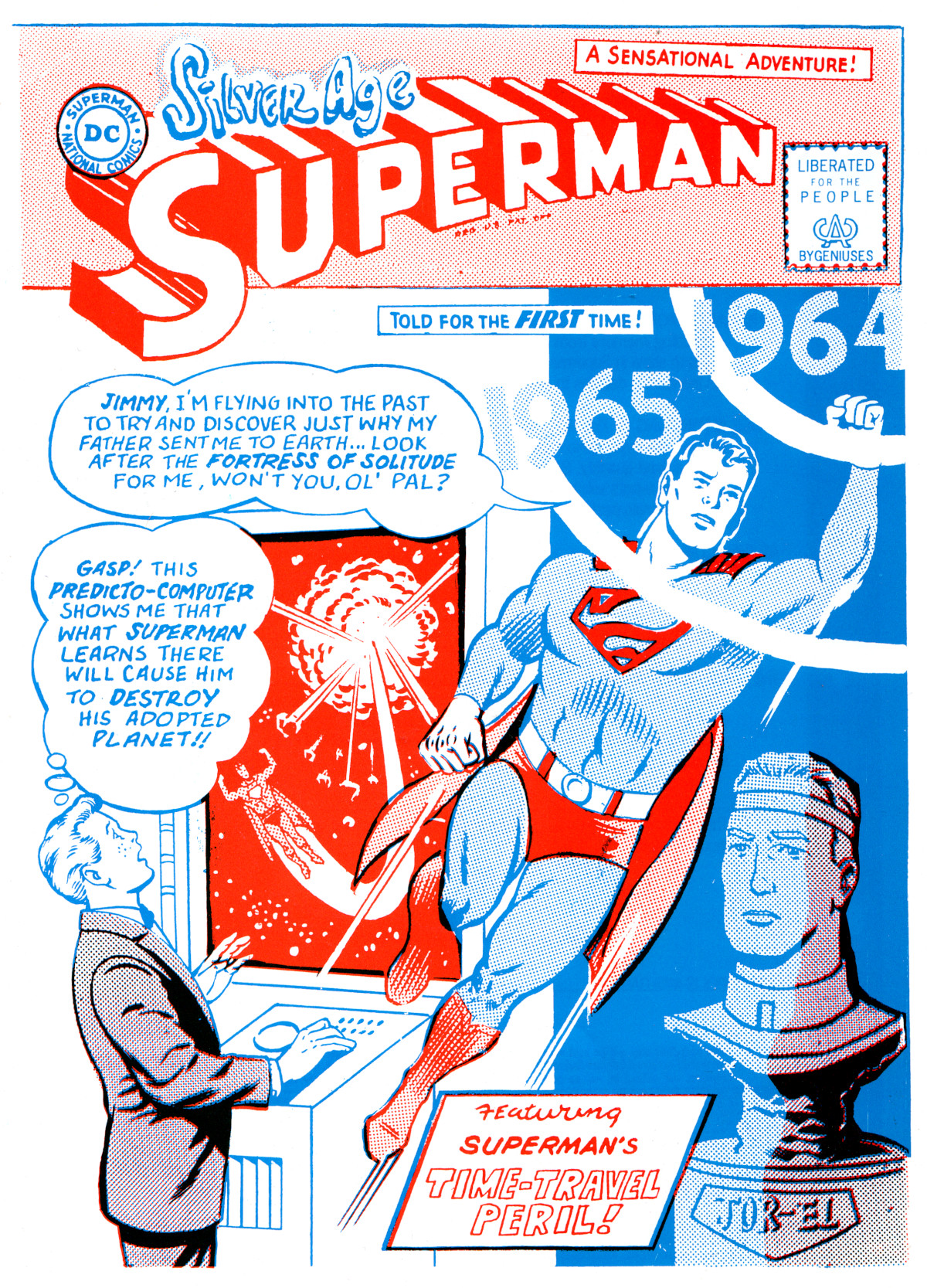 Back in print: Silver-Age Superman by Ed Pinsent and Mark Robinson.
Available now from Lulu.com, £10.35 plus postage and packing. 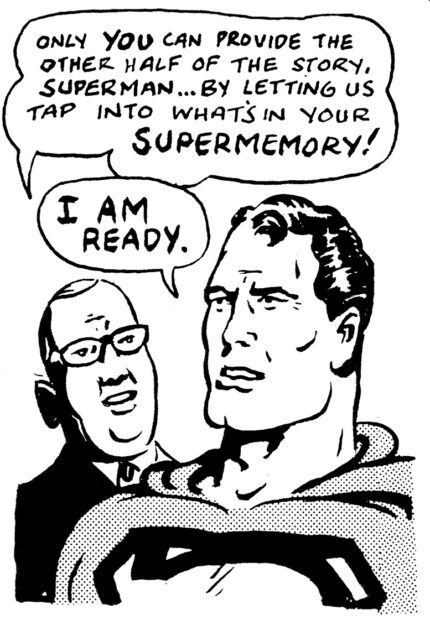 This book originally appeared as an A4 sized comic book in 1993. This 2020 reprint is a facsimile edition with extra pages.

Not long after my Illegal Batman book appeared, the Cardiff-based artist Mark Robinson (creator of Bang! Comic) paid me a visit in London. He wondered aloud if there was any scope for an equivalent “Illegal Superman” comic. We discussed it briefly and it seemed like a good idea to both of us.

We both shared a love for Silver-Age DC comics, in particular the artwork of Curt Swan, and the Superman stories which appeared under the editorship of Mort Weisinger. At some point it became clear to me how to do it. I wrote to Mark and proposed that I write a story and that he should illustrate it.

I wrote the text, and arranged it in panel grids. Each page was word balloons and captions, with an occasional suggestion for what the drawing might contain, but mostly I left it up to Mark. We did it in stages; I sent him a chapter of a few pages as I completed it, and waited until he sent me xeroxes in return. The story evolved nicely, particularly as we exchanged letters discussing ideas.

Around the mid-point of the story, Mark noticed that our version of Superman hadn’t yet performed a single heroic super-feat, so he suggested I include an action scene. My response was the collapsing cathedral incident.

As we neared completion of the book, we wanted to add touches to make it resemble a genuine silver-age comic. We weren’t thinking of bootlegging or pirating DC and attempting to create a fake product for financial gain; we just had a real affection for silver age comics. I designed a contents page, based on the design of an 80-page Giant, adding text of my own. I also photocopied old 1960s comics adverts, and again added text of my own, in the manner of a Situationist making a detourné comic strip.

My original plan had been to commission Andy Roberts to do these adverts for us, based on his small-press comics where he had wittily subverted pages from The Sun newspaper through collage. A letter was sent to him, but he didn’t receive it in time. We were both disappointed; he would have done an excellent job. 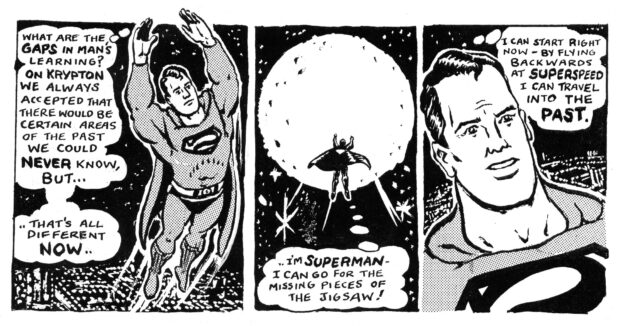 Mark and I collaborated on the Metropolis Mailbag section. It was as if we were sending letters to Mort Weisinger, and he published them. Except that we were now older people looking back on a childhood of comics reading; it was a rough form of time-travel. Mark did the drawing for this page, collaging images of the Metropolis skyline originally drawn by Wayne Boring.

The cover was pencilled and lettered by Mark, and inked by a mystery professional artist. I had no hand in the design or writing of the cover, and am very pleased with how it turned out. The back cover is mine though, where I mashed up images of church misericords (carved and decorated stalls in the choir of a church) with images of Superman and other characters from the story.

I never saw any of the original art for the book. Mark later told me that every page was in several pieces; my sense is that he drew every panel separately, inked them, and composited them into a completed page.

The last step was the printing. I had the interiors done at my usual place, but we wanted to get the cover right, so we asked Paul Harvey to do it. Paul Harvey was the co-creator of Mauretania Comics with Chris Reynolds (they were at art college together), a comics artist in his own right. At the time he was also working at a printers, and able to get litho printing done at an affordable rate. He produced a gorgeous glossy two-sided cover for us, although the economics of printing meant that I ended up with more covers than were needed.

I hope the above indicates what a collaborative effort this book was, with input from both creators working together to shape the book as it went along. In another post, perhaps, I will write more about the original ideas and themes behind the story. 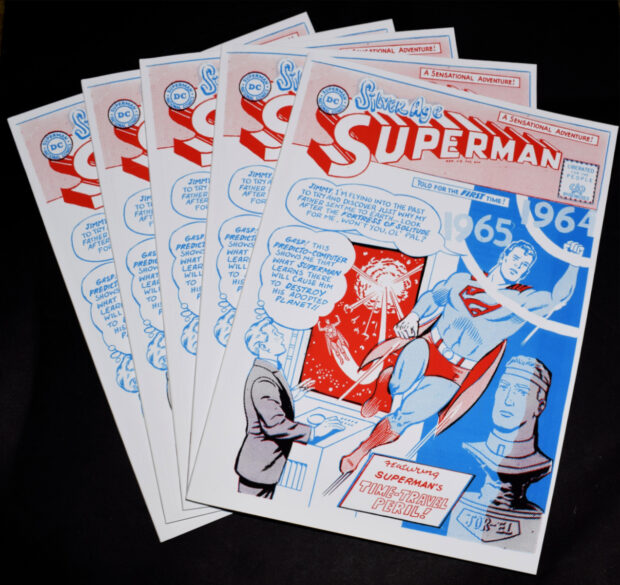 This “expanded edition” now includes three reviews / write-ups of the book, one of them written by Roger Sabin, author of Adult Comics: An Introduction, comics historian and expert, who teaches a course on the subject at UAL Central St Martins. I’ve also reproduced a promotional flyer which was sent out in the mail to garner sales. Other than that the entire story is reproduced exactly as it appeared, with digitally-enhanced scans.

Superman copyright and trademarks are owned by Warner Brothers and DC Comics.
Silver-Age Superman is a work of fan art.