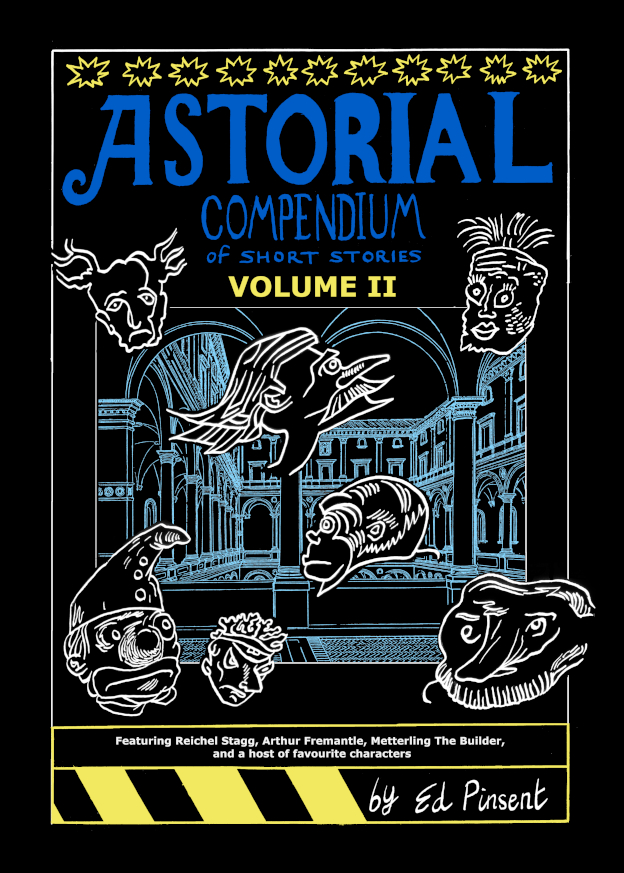 This volume reprints and collects pretty much all the Astorial Stories I could find for the period 1987-2009, set in the imaginary Astorial Hotel. Some of them first appeared in Fast Fiction magazine and other small press publications.

Where Volume I explores space and depth inside impossibly large rooms, the stories here tend to be a shade more character-based. The backgrounds and settings are more sketchy, while I obviously relished the opportunity to draw the faces and bodies of these assorted grotesques.

There are three stories featuring Reichel Stagg and his changing fortunes. He seems to be one weighed down by many cares and anxieties that keep him awake at night. Ultimately I left him buried under the earth, and attached by tendrils to one of the vegetables that seem to preoccupy him so much. It’s a shame that his liberation proved so short-lived. Incidentally, this story suggests that there’s yet another underground world beneath the Astorial Hotel that’s just as unpredictable and unknown, possibly inhabited by sprites such as Ivan the Troll and his white shadow.

The cleaning lady in Hubert The Chemist is based on a real-life person. One of her traits was that she constantly doubted her ability to do anything worthwhile, and lived under a constant cloud of unhappiness. I’ve tried to extend this into a morality tale where she even fails to recognise gold when she finds it, mistaking it for ashes. Hubert is not, I hope, actually as patronising and smug as he appears here; it’s just her perception, as everything she sees is filtered through her own inferiority complex.

Rombo The Clown resulted from a weekend staying at the home  of Phil Elliott – a jam strip where we worked on the same page simultaneously and invented each panel as a response to the previous one. In my mind, Astorial Stories have to follow certain rules and codes, which Phil seemed to understand intuitively, even as he departed from them.

After letting the Astorial theme lie fallow for about 15 years, I suddenly came up with the Arthur Fremantle character. He was much more engaged with the “space” of the Hotel, especially as reflected in his voyage to find gorillas that effectively turns into an exploration of terra incognita, as though he was a jungle explorer. He also turned out to be extremely eccentric, and tragic. Small details of his character traits were inspired by a trip to New York City and sharing a small hotel room. By this time there was also a change in drawing style, moving away from my scratchy-wriggly lines drawn with a pen, instead using a brush for more definite and considered strokes.

I’m still not entirely sure what I mean by “Astorial Is Astral”, but it’s another theme I would like to investigate more deeply some day; there may be one more story in it somewhere. I think it’s something to do with external “astral” entities entering the Hotel from above, and this trope is only faintly suggested by the appearance of The Faceless One.