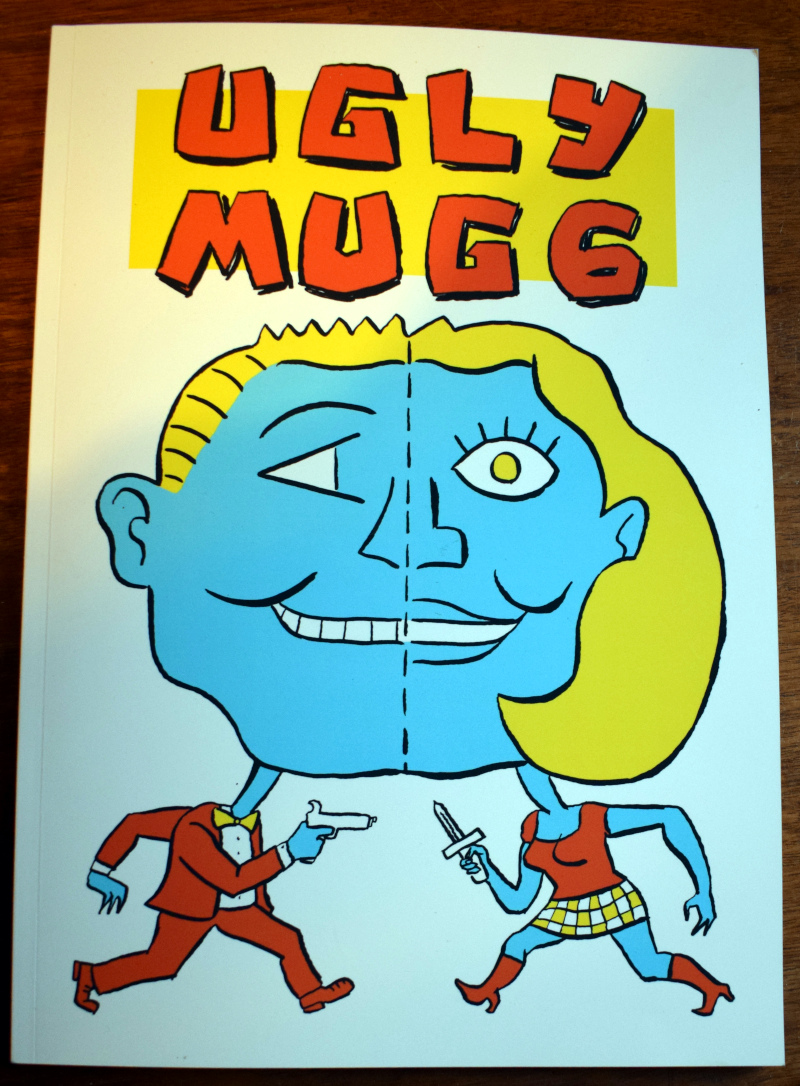 This is a totally biased, partisan, non-objective review of the new issue of Ugly Mug comic, published by Harley Richardson…Harley is an old friend of mine, he helped me with the Fast Fiction service in the 1980s, and we’ve collaborated on other projects too. Also he happens to like my comic strip work, so my work appears in the pages of this new issue, and in issue 5 – which marked the “relaunch” of this title when it appeared last year. I also happen to know some of the cartoonists who appear in this issue, who were also close friends of mine when they lived in London, so you can add “nepotism” and “favouritism” to the list of charges here.

Ugly Mug #6 is an anthology of comic strips and cartoons…the first thing I felt when I had this hefty wodge of paper in my lobster claws was a strong visual buzz, a mild electric shock…the images just seem to fly off the pages, in a sequence that appears to have been edited for maximum visual contrast. Or perhaps thrown together any which way. It works whichever nut you choose to crack. It might be because Harley isn’t so keen on “contextualising” as I am; no table of contents, no headers, no page numbers, very few clues as to what ocular surprises await us as we turn the page. Even the introduction to the new contributors is riddled with humourous misinformation, a trick Harley’s been playing for years. (It sort of backfired once when a journalist really believed that Denny Derbyshire and Spencer Woodcock were one and the same person.) 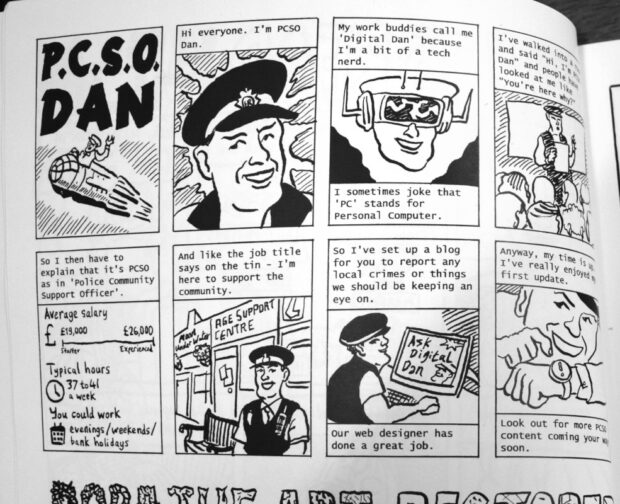 Harley occupies a lot of these pages himself, with half-page gag strips, longer sustained tales, and wordless visual experiments. He tells me he’s been in an exceptionally prolific mode of late, and managing to sustain it too, with regular sessions of unflagging energy. You can imagine the ink flying around, as yet another sketchbook is filled. One method involves recasting his lively figure drawings, a craft he picked up from life classes with the famed model Betty Frankenstein, into semi-narrative expositions and exercises. You may prefer it when he lets fly with his absurdist humour and wit, so prevalent in those early days of Captain Maroon from the 1980s. These humour strips are combinations of sharp character observation and a rather surreal take on everyday life, one particularly bizarre instance depicting a garden party conversation which gets completely out of control. With the character P.C.S.O. Dan, Harley lampoons the kind of corporate nonsense that has been blighting UK society for about 30 years, creating a climate where every semi-professional thinks they have to puff themselves up with jargon, specialist skills, and half-baked ideas about web technology. Such ridiculous ambitions are accurately punctured, eight panels at a time, whenever Dan appears on the page. Indeed part of the joke might be that Dan himself, though brimming with self-confidence, has no awareness of how silly he is.

Harley also drew the cover, of course. If that split-face motif had appeared in 1987 or 1988, we can imagine the same subject being tackled with gruesome relish by one of the American “ugly graphistes” such as Xex or R.K. Sloane, or with pinpoint accuracy by the sardonic Dan Clowes. In Harley’s hands, it looks playful at first, but cleverly smuggles across an ambiguous message about concealed hostility. You could easily apply it to relationships and power networks within your own workplace; many of us today work for organisations that are schizophrenic, two-faced, and riven with internal strife. 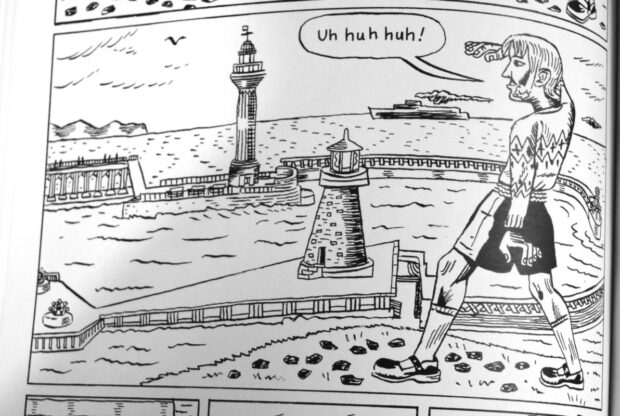 Next I bring forth Marc Baines. Another old friend from our small press days, who helped Chris Reynolds, John Bagnall, and myself when he published a line of Kingly Books. Now established as an art tutor, he’s embarking on a lengthy story (sorry, but I dislike the term “graphic novel”) called The Rightful King of North Riding. The previous chapter was bewildering enough, but this instalment ‘Whitby’ is equally tasty, full of strange and inexplicable events which may or not be explained later in the story. Just the way I like it. On a technical level, Baines combines a respect and love of English illustrators (such as Ravilious and Bawden perhaps) with poignant observations of the English landscape, a landscape that’s somehow both real and imagined, and also seems to trigger buried impressions of the past in the memory of the reader. It’s a mysterious, intangible process; one I’d love to see more of in comics. Baines pulls it off without compromising the flow of the story, and this may be why his concise chapters continue to live in the mind after reading.

There’s also the daring use of sound-effects lettering; and some very accomplished figure drawing, especially on the page where Vanda contorts her body as she crawls through a tunnel, surrounded by insects and crabs. Speaking of which…there’s a three-quarter page depicting the strata of the cliff which is just delicious, rendered with bold abstract patterns while the two heroes appear as skeletons in this “X-Ray” view. One of many pages in the book that confirm Harley’s taste for the strong graphics we used to get in the pages of Raw, Weirdo, and Snake Eyes. Write as I may, I’m still failing to capture the core meaning of this odd Baines episode, where every physical object in the panel is drawn to somehow contain a hidden luminous significance, especially the sixpenny-piece at the end; it’s linked, by the “Clack!” sound effect, to whatever it is that is caught by a seagull’s beak earlier in the tale. 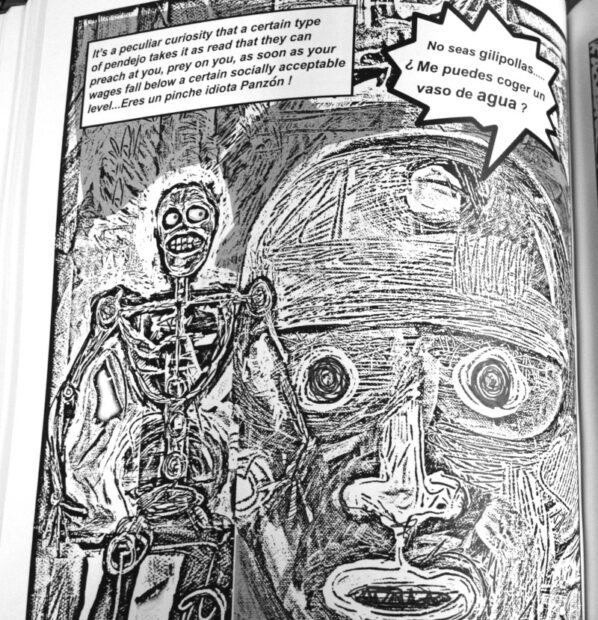 Further brain-fry awaits the reader with ‘Sous Chef Blues’, by Tom Tiffin. This genial fellow was a regular contributor to Fast Fiction and also published The Big Lift, a lively book which seamlessly combined darkness and humour in its odd tales. In today’s sizzling eyeball-burner, there may not be much coherent narrative, but the images are wild – impassioned and abrasive scrawls, seemingly arrived at by a combination of wax-resist, Max Ernst-styled frottage, collage of found visuals, Letratone laid down any which way, photocopied blow-ups, and Tom’s typically loose brushwork. How many contemporary comic artists do you know who exploit these gestural fine art techniques with such confidence? Captions and word balloons are spliced in with as much zesty violence as a Peckinpah edit, switching liberally between English, French and Spanish, as the fragmented tale emerges in urgent, acidic, gasps. Eyes, teeth, skeletons, knives…perhaps an impressionistic vision of cookery going horribly wrong, descending into cannibalism. A nightmarish pop-culture take on the works of Claude Lévi-Strauss. If there’s a whole book of such pages lurking somewhere on this overheated planet, it could hold its head high alongside any French graphzine screenprinted by Le Dernier Cri. Vince Mancuso is a new name to me…I see he’s based in Toronto, is an accomplished and experienced illustrator, and is conversant with sequential art in many forms – storyboards, animation, character art, plus he’ll happily give you lessons in all these areas. Two pages here of ‘Scenes from Club Mancuso’ depict heads and shoulders of imaginary characters, drawn with tremendous elan and making effective use of ink-and-wash shading, along with very fluid brushwork. The faces tend to burn their way into your brain, even when the characters aren’t looking directly at you. They could be read as photo-shoots from a 1930s Hollywood movie that never got made. Or advertising cards for a theatrical agent. With just faces, names, and simple titles, Mancuso allows us to play an open-ended game and concoct our own stories. 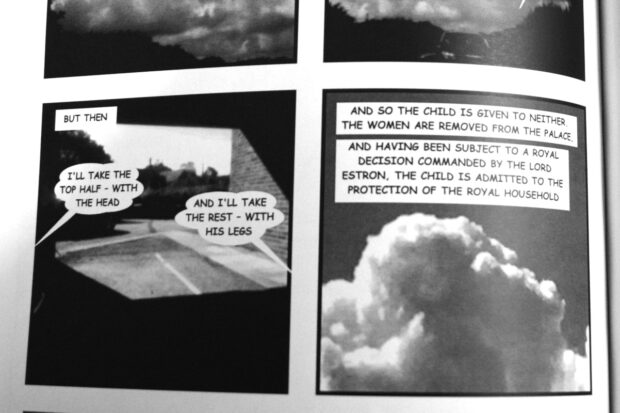 Now for another old friend, Chris Reynolds – that fey Welsh mystic who’s currently enjoying international fame with his splendid Mauretania collection from Editions Tanibis. Known for his long epics like The Dial, Chris has recently taken to producing very compact one-pagers and publishing them direct on social media, sometimes collecting related tales together in anthology works. In some cases he doesn’t even draw them by hand, instead creating a six-panel sequence from his own (I assume) evocative photographs in black and white. One of these appears here in Ugly Mug, titled ‘The Young Prince Umsween’. At one level, it’s a retelling of the Judgement of Solomon story from 1 Kings 3:16-28, but with characters – Lord Estron, two “loud shouting women”, and a court aide – whose faces we never even see, and instead their existence is merely suggested by word balloons. In one panel, the tails of these balloons point to figures “offstage”, evoking the two women hiding in the shadows of a strangely illuminated suburban scene of a forecourt. The remaining images are simply clouds, or cloudy landscapes; and two blurry shots of cars in traffic on a sunny road. By themselves, these photos may be commonplace, banal even; but once set into the story, they acquire a compelling symbolic meaning.

For about 30 years, I have been in awe of Reynolds and his facility for suggesting so much content in his tales with such minimal effort – he relies on the reader’s imagination to do a lot of the work, supplying details. Not that Reynolds is lacking in the imagination department. He has so much to spare he could export it overseas. The closing panel here serves multiple narrative purposes – it completely subverts the familiar Solomon story, in favour of Reynolds’ predilection for a dark and twisted fable; it reveals the true nature of the two scheming women, in a disturbing plot twist; and it sets the scene for further potential chapters in the life of this Prince Umsween. For all I know, Reynolds has already written them, creating yet another new world to rival Narnia.

Well! This is turning into a very long post, so I’d better conclude my observations some other time, and we can visit the other artists and contributors in detail.

Available from The House of Harley