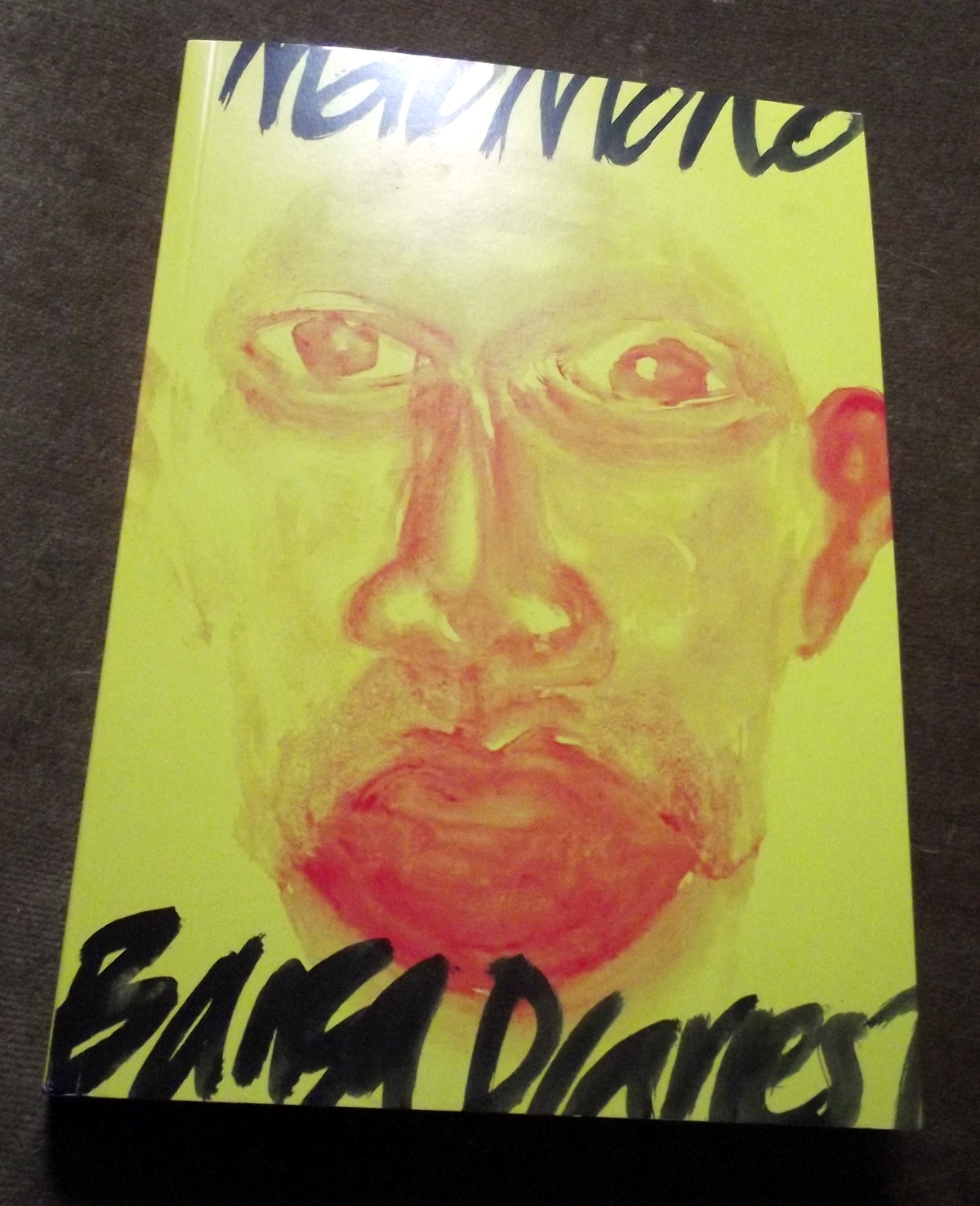 I’ve gotten about halfway through reading Monomono-Banza Diaries Vol. 1 (DARK WINDOW PRESS) by Eze Chimalio. I’m still waiting for the story to begin. But this strange 347-book doesn’t follow any of the conventions of comics, graphic novels, story-telling, or even normal prose and literature. Instead, it works to an open-ended, free-ranging and very fluid structure, enabling the artist to introduce multiple characters, multiple viewpoints, and multiple storylines. A character may appear for 3 or 4 panels, speak their piece, and vanish again – or possibly reappear 50 pages later in a quite different setting. Chimalio structures his book as a series of short vignettes, sometimes introduced by a lengthy caption which takes up the top third of the panel, a stream of baffling prose which may or may not relate to the events which unfold for the next 14-15 images. Other than that, you’ve got no breaks, no chapter headings, no captions which explain where we are or what’s going on, no beginning-middle-and-end structure, in short nothing that would help orient the reader the way a conventional graphic novel might attempt to do. Chimalio’s first achievement, then, is a liberation of story-telling from the bonds of common sense, in favour of a poetic, personal, stream-of-consciousness mode of writing. I’m hardly surprised to learn that my old friend is also an avant-garde jazz musician; this book is as close as I’ve seen to expressing free improvisation in panel form.

This isn’t to suggest Chimalio’s diaries constitute an impenetrable wodge of automatic writing. Keep reading, and the patterns and themes subtly begin to emerge. There are at least three primal themes I’ve found so far: sex, God, and money. As a matter of fact two of these themes are set out in the very first panel of the book; “What makes a man think of God and sex at the same time? His death perhaps?” The sex themes are expressed in sets of remarkably candid and outspoken confessionals, and this is where the personal “diary” form that Chimalio has chosen really comes into its own. The complexities and contradictions of religious belief are not so much explored as deftly highlighted, showing the doubts and puzzles associated with faith. As to money, in Chimalio’s world it’s inextricably linked with politics and power, and the business-suited figures which loom into view and dominate certain panels are in all probability steeped in corruption, openly serving their own interests. We see people from all strata of society, including politicians, businessmen, and religious leaders; men, women, children, babies; poor people existing at the brink of starvation, and rich people travelling in planes or limousines. Their figures and their faces fill each panel, sumptuously drawn with Chimalio’s sinuous and juicy linework. Backgrounds are peremptory at best; we might get a few lines suggesting a mountain, the interior of a vehicle, or a barren landscape with a single tree. Mostly he prefers leave the background white and empty, and concentrate on what he’s clearly interested in – people. This blank background strategy is one of the tools that enables the fluid motion of the mini-stories, the mosaic structure; the eye passes from one panel to the next unencumbered by superfluous detail, and thus we travel freely in space and time.

As I said, Chimalio is interested chiefly in the people he draws, almost compulsively repeating their faces across panel after panel, paying close attention to their eyes, but also the bone structure and muscular twitches of their faces. What pleasing abstract shapes and lines he finds, as these inscrutable souls shift their expressions slightly. As an artist, Chimalio is also much stronger on body-language than I recall from his Paraffin books of the 1990s. When we see a framed top-half of a figure, it’s the arms that are doing most of the talking, making big expressive gestures that communicate inner meaning. Even the most casual flip through the pages, in fact, will reveal a lot of hugging, touching, and intimate hand gestures between people, expressing warmth, love, urgent tactile messages.

This brings us to Chimalio’s secret weapon. In this book, he’s a mind reader. You will need to pay close attention to the word balloons and the thought balloons. In Chimalio’s simple set-ups, there is always this striking contrast between what the characters are saying, and what they are thinking. In some cases, a politician or religious figure is swiftly exposed as a fraud or a hypocrite. In others, relationships between men and women are revealed as fraught and complex networks of misunderstandings, failed communications, and clashes of imperatives. In still other cases, the conflict between speech and thought is even more ambiguous, and from their encounters human beings emerge as near-mystical, utterly unpredictable in their eccentricity. Chimalio’s achievement here is to peel people apart and leave them open; nothing is spared from his razor-sharp X-ray vision. Yet the operation is not malevolent, and performed with tremendous compassion and subtlety. The artist’s intention is not to satirise, make us laugh at his characters or hold them in contempt, but simply to see them for what they are.

If I have to find fault with this unusual and singular book, I would observe that there’s not quite enough action going on to sustain my interest for its length. It’s poetic, charming, and mysterious, but it’s still fundamentally a talking-heads comic. The characters do a lot of talking and a lot of thinking, but not much else. The reader’s eye seizes on small details like figures walking, travelling, drinking from a glass, climbing into a bathtub, simply because they provide welcome relief from the intense scenes of verbal and non-verbal communication. However, that’s the beauty of this book, and if you can adjust your comic-reading expectations accordingly, you’re in for a strange and wonderful time.