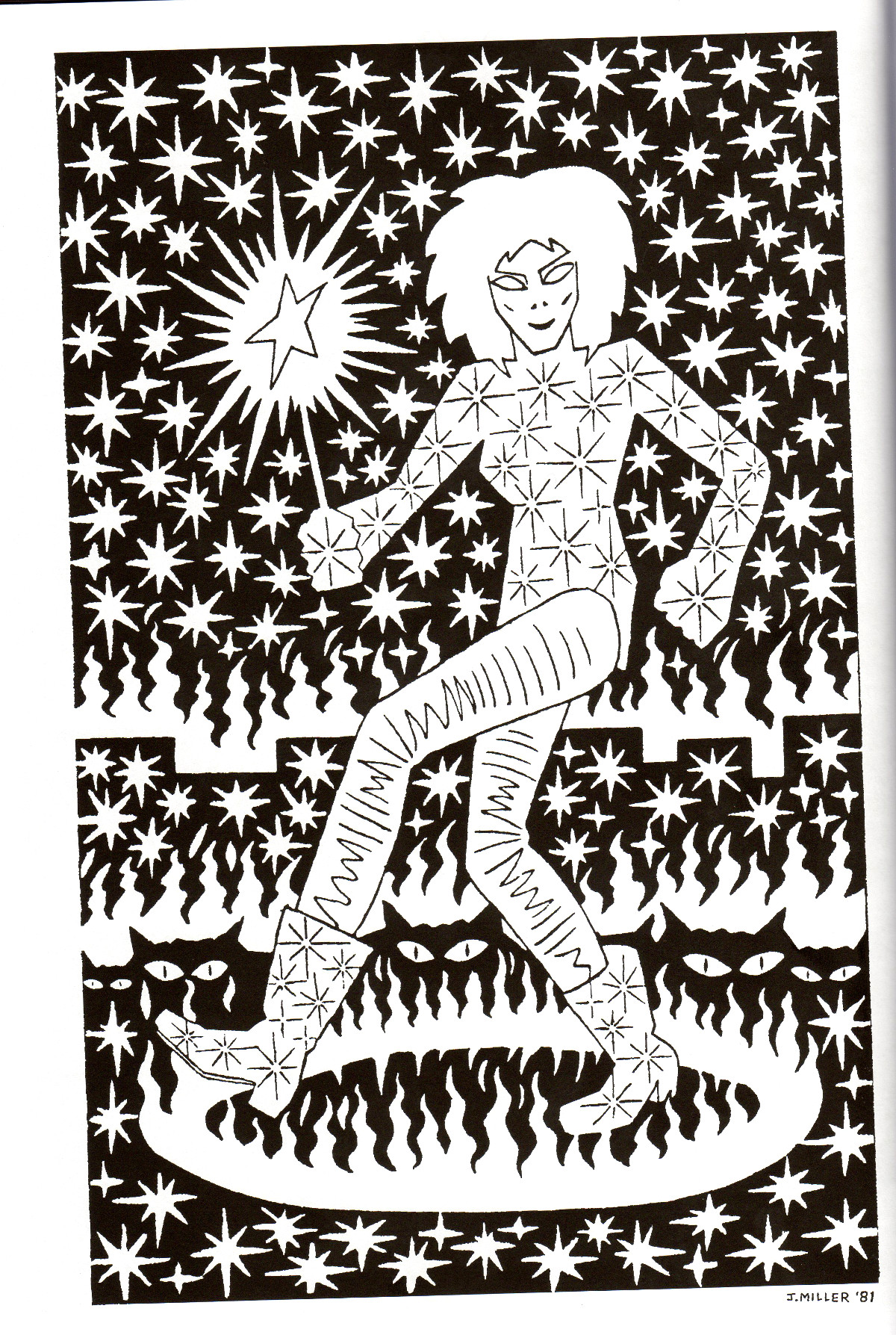 Earlier this year I purchased two volumes in the series The Collected John G. Miller, both generous A4 paperback comic books published by Braw Books. I used to publish John Miller‘s work in the pages of Fast Fiction in the 1980s and 1990s, but I realise I didn’t do him any favours by reducing his work to A5 scale, nor through the patchy printing. All that is rectified by these handsomely produced books, probably using digital scanning to render the precise edges of Miller’s hard lines as clear as a stencil, and produce areas of solid flat black that would make a zebra proud. The publisher Rob Miller has done an excellent and sympathetic job in presenting John Miller’s work. He writes: “Knowing John for the past 7 years it became quite clear he’s probably our most important underground/outsider artist and the opportunity to access his ‘Archives of Doom’ was too good to pass up, keeping it all strictly ‘no-frills’ and just letting the work speak for itself.”

There are numerous reasons why I like John Miller’s unusual and imaginative work. First of all the visual energy that sparks off the page is remarkable. I suppose you’d have to be blind not to notice this the second you pick up the book. Stars, circles, zigzags, flames and other dazzling shapes leap about the panels and cause astonishing op-art effects. If you weren’t blind before, you will be soon. These visuals create near-hallucinogenic sensations in the reader. Miller draws everything using this hard-edged, heavily stylised method; figures, faces, backgrounds and visual effects are all as one to him, resulting in dense, hermetic panels that yield their secrets as obstinately as a rusty cold water tap.

Next we’ve got the far-out and mind-blowing content. Without doubt, Miller has been influenced by his childhood comic reading (Marvel Comics, The Eagle, etc.), and we’ve got plenty of science fiction or eerie supernatural tales in the mould of any great Alan Class reprint. Likewise, his coarsely humourous strips have all the slapstick wildness of DC Thompson or Odhams comics from the 1960s, with the violence and invective taken up several notches for contemporary adult readers. However, these themes are just the starting point for stories where Miller can let his unhinged view of the world run free. At his best, he can create stories that sap your sense of reality. Stories such as “Ghostman Versus The Evil of the Ghost Train” or “Renegade X Android Smasher” are fractured narratives which freely mix up the characters’ reality, fantasy, and memories, in strange time-travelling episodes; there is no distinction drawn between what a character thinks/imagines/remembers, and what is “actually” happening. Readers of Philip K. Dick will appreciate this and have hours of fun with these dimension-switching experiences. 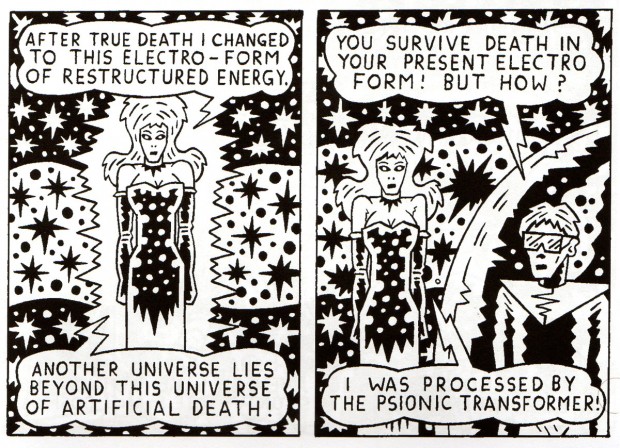 Here’s some other reasons why I like John Miller:

Use of local dialect. Dialogue spoken in heavy Glaswegian accents, rich with local slang, all rendered phonetically. Not enough comics do this, if you ask me. The Broons and Oor Wullie used to be fiercely Scots, but even their dialogue was watered down in later reprints and remade into more intelligible English for the benefit of us Sassenachs. Miller wisely refuses this genteel “quaint-ifying” process. 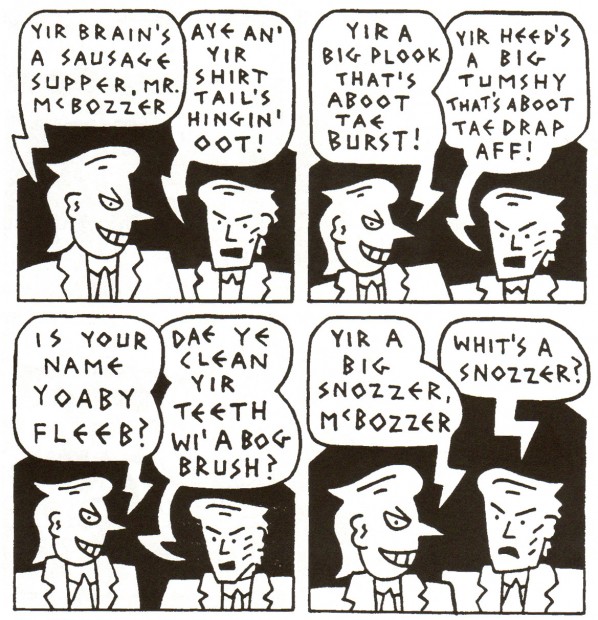 Strong female characters. The Gasworks Girls are a trio of scary anarchist free spirits who enjoy destroying property, getting as drunk as possible, and exhibiting a healthy contempt for all authority figures. The Associates sang of the “Party Fears Two”, but they had nothing on these harpies. Also The Girl With The Flowery Trousers (Suzy), who finds herself in many inexplicable surrealist situations; and Frosty, an impossibly beautiful and near-silent female who is nothing short of a mystic apparition in the midst of mundanity. Even in the science-fiction action stories, you’ll find it’s the women characters who initiate most of the action, and the men are clumsy or impotent bystanders. 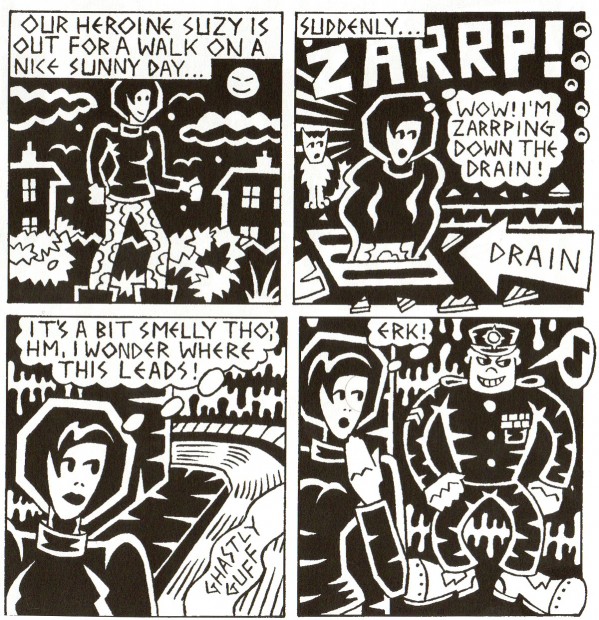 Angular lettering. His lettering is as much a part of the page as the drawing, adding to the general aesthetic of hard-edgery where every single element appears to have been snipped out of sheet metal. With those angled capital E and O letters, Miller adds another layer of spikiness to each panel.

Zooty The Cat. This grinning feline should be instantly admitted to the pantheon of Great Comic Cats. A trickster figure, the Fool of the Tarot deck. Appears freely in any story he chooses, whether associated with the characters or not, and he always outsmarts the human race.

These observations above refer to the 1980-1989 volume (with the red cover), but I also have a copy of the 1990-1999 volume which contains one of my favourite John Miller stories of all time. It’s called “It Was The Day Of The Lizard Man”, and is one of the most affecting and uncanny stories I have read anywhere. Every time I read it, or even just think about it, it makes me shudder.