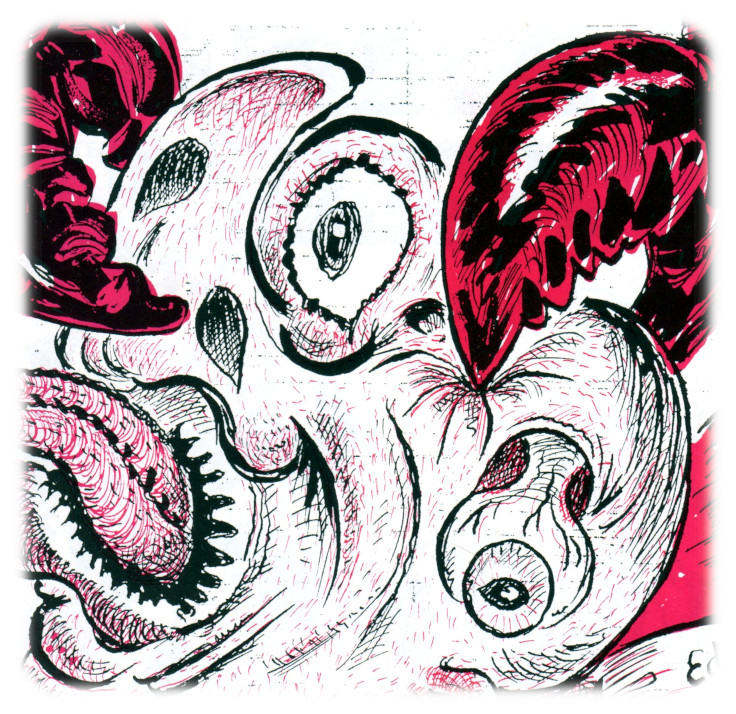 Here you can download a scan of “The Transfiguration of Dennis Dewprat”. This was printed as the back cover to The Big Lift #3, edited by Tom Tiffin, in 1988. Tom was able to get proper litho printing for his A4 books (even though he wasn’t averse to small-run photocopies too). I tried to take advantage of this facility by adding a second colour to the drawing. I did it by “hand-separation”, or at least my attempt at it. The black and white drawing came first, then the magenta layer was drawn (also in black) on a piece of tracing paper or layout paper. I probably used a magic marker for the solid reds – you can see the edge made by the “chisel” fibretip. There’s also cross-hatching with a finer nib. Robert Crumb was a real master of hand-separation, and you can examples of how good he was by looking at the covers of Zap Comix, for instance issue #1. Another undergound artist who was brilliant at it was Rick Griffin, and he used that technique for the cover of a Grateful Dead album, Aoxomoxoa. None of that artwork exists in colour; it’s all B/W hand-separation, and the coloured image only comes together at the printing stage. I regard it as a real craft, which isn’t to say I’m any good at it…

I like “lobster claws” as an image in my drawing and writing, and often use it for my music reviews. The lyrics of Fred Schneider for ‘Rock Lobster’ are one posssible inspiration, or perhaps the poetry of T.S. Eliot (“a pair of ragged claws scuttling across the floors of silent seas”). I often feel that we have a precarious grip on things, that our perception of reality is clumsy; lobster claws is one way of trying to express the problems of this simplistic apprehension.

This “transfiguration” has ended up quite a violent and grotesque image, but I intended something much more benign; it was meant to be a beneficial change being wrought by the unseen Arthur Cicatrice. Arthur’s surname translates as “scar”, furthering the theme of implied violence. “Dennis Dewprat” is an anagram of my name.