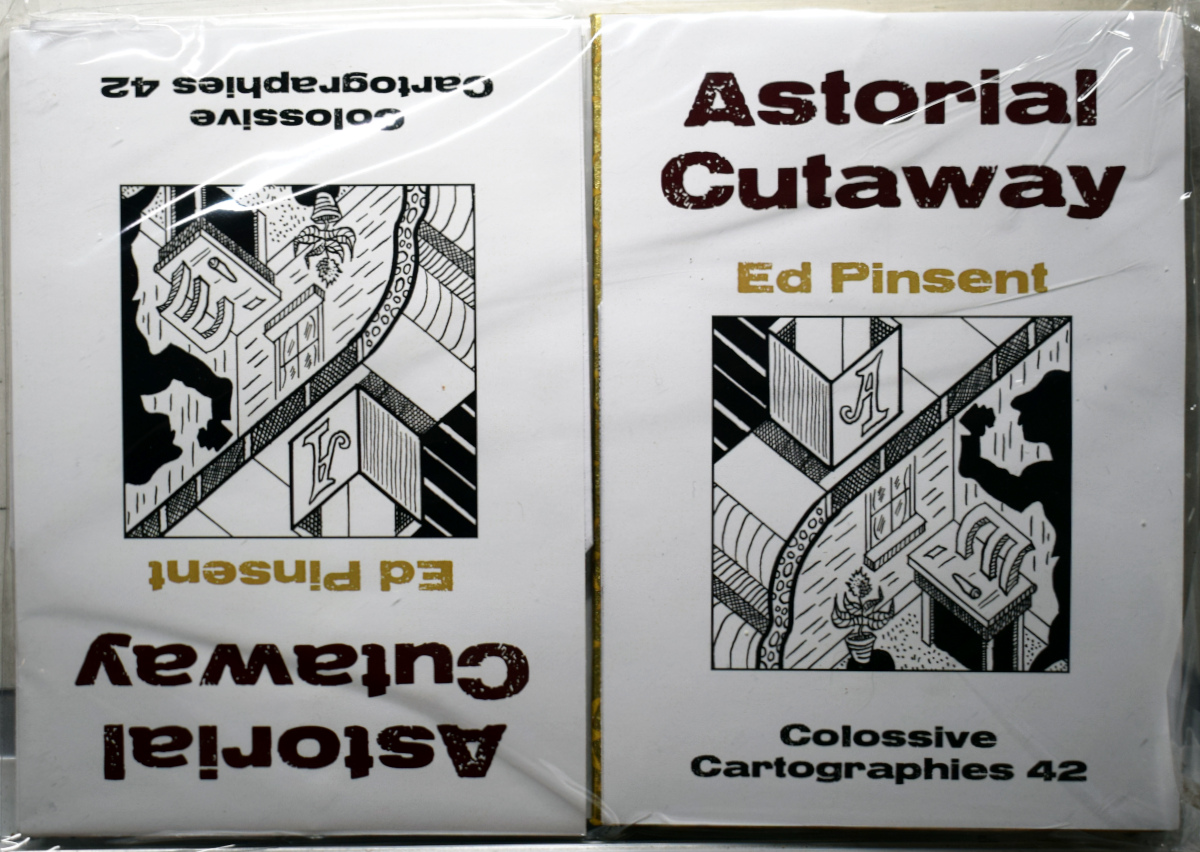 This just arrived. Drawn earlier this month, after a discussion with publisher Tom Murphy in November last year. That’s more like it – I mean the speed of delivery which is something I like about the small press (in the 1980s, Fast Fiction really was aiming to be fast).

Colossive Press has this unique range of mini-comics called Colossive Cartographies. They’re folded like a map printed on both sides. Creators have used them to create single images, or tell stories, express ideas, or all of the above…sometimes working inside the ingenious grid formed by the folds of the map. When I first saw one of these, I seemed to think (for some reason) they were similar to those paper fortune-tellers that we used to have on the playground. Cartographies is quite different though. As a format, it looks deceptively simple but turns out to have hidden complexities.

For this mini-comic, I had an idea tucked away about a view of a single room in the imaginary Astorial Hotel. Originally it was going to be like a diagram with lots of annotations, pointing out odd details in the room, and what might lurk behind the walls. I first used this annotation device in the five Astorial Stories mini-comics from around 1986; there was a page of footnotes in the back that purported to explain everything. But they were misleading footnotes, the information was unreliable, they explained nothing, and instead took the reader down pointless detours, dead-ends, and rabbit-holes.

As I compiled my list, I wondered if it would be nice to show a cutaway view of the room. In real architecture, cutaway illustrations have a serious purpose. I like one definition that describes it this way – “surface elements of a three-dimensional model are selectively removed, to make internal features visible, but without sacrificing the outer context entirely.” Naturally, I lack the drawing skills to do a 3-D image properly, and I also wanted to do a typically crazy version of a cutaway. So the cutaways you see in the image add nothing and reveal nothing; much like the footnotes, in fact. At any rate, it’s not really where you would expect a cutaway to be. All of this allowed me to have some fun with my adjustable set-square, which I’ve used on recent Astorial stories to come up with “impossible” perspectives and insane points of view.

I also wanted to tell a short story – a very short story as it turned out. The couple in the room are doing something, but it’s not immediately obvious what. You might find out by exploring the whole mini comic. The annotations, which by now had assumed a slightly authoritarian voice, are observing the action remotely in a creepy surveillance kind of way, but even these invisible monitors can’t understand what’s happening,  nor do they deign to show much interest in it.

I then worried that I’d run out of space. So it occurred to me to print all the notes on one side of the Cartography, and pretend that this text was the “Legend” of the map. I then had sufficient space to add hand-lettered captions to the image. The net result is that a reader must keep on turning the comic over and over, reading and looking, and trying to piece it all together.

Under the guide of whimsy and eccentric humour, my aim is to reveal a darker side of the Astorial Hotel, where nothing works as planned, all the guests are estranged from each other, and even the simplest object may turn out to be harmful or even life-threatening in some way. It has a terrible effect on the people living there. I freely own that it’s a very bleak metaphor.

Many thanks to Tom and Jane.