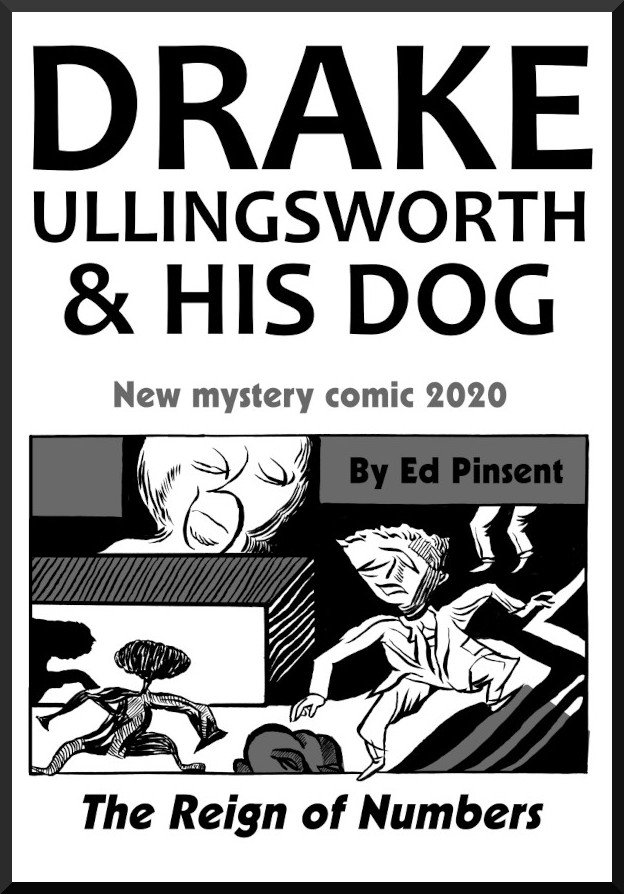 The latest comic book by small press comics artist Ed Pinsent is a 56-page story featuring the detective Drake Ullingsworth and his Dog.

The story is a continuation of the shocking events chronicled in Drake Goes Into The Underworld, a story published in 2017. Following the death of King Shop, the city finds itself facing a major economic crisis; a resolution to the situation unexpectedly arrives in the form of numbers. The Mayor’s office, working to a project led by Arnold Perez and his team, are pushing a scheme to cultivate numbers as the answer to everything. Drake finds himself pulled into this highly unlikely scenario, assisting with his psychic abilities. It starts out with office politics, then gets worse. Violence and terror await him.

Ed renders the story in a style approximating film noir / 1940s mystery movies, with long dark shadows, impossible perspectives, desolate street scenes, and claustrophobic interiors viewed from unlikely angles. Drake, with his old-fashioned suit and hat, looks the part for a detective, but the crazed events of the modern world and its demented populace are, once again, beyond his ken. There’s also an underpinning surrealist atmosphere throughout; Drake’s dream world, his strange recurring nightmares full of inexplicable symbols, forms a major part of the tale.

The book has drawn on some influence from silver age comics; for instance the work of Mike Sekowsky in Justice League, whose figures often appeared to be floating in their mannered action poses; and Steve Ditko, specifically the Mr. A comics with their abstract crazy-house backgrounds, which Ditko used to convey his stark moralistic messages. The concept of “solid” 3-D numbers made of metal or wood, central to this Drake story, was inspired by a particular Ditko story where a murderer kills his enemies through his ventriloquist doll, whose mouth fires out metal letters.

All the characters in Drake’s world have their own odd way of speaking. Ed has had fun devising word balloons with dialogue that draws attention to itself, with peculiar sentence construction and the overturning of familiar cliched phrases. Attempting to sound menacing, the villain of the book declares “You have some brass ears to show up at my secret lair!” The incompetent chief of police exhibits his control of the situation by stating “We’ve had two dozen victims so far, 30 of them sitting a stone’s throw from where my left arm can’t reach.”

The story was written in April 2019; the artwork has taken over a year to complete. Ed continues to labour at comic pages in the old-school way, on Bristol board with Indian ink, brushes, Gillott nibs and mapping pens. However, halftones were added in the computer, applying layers in The GIMP application.

Comments from a reader:

“The reason I’m writing is to say how much I’ve enjoyed your Drake Ullingsworth comic. It’s really something! I find your illustration to be a pleasure throughout. It’s really clever how you seem to grab the first idea your hand finds and turn it into a coherent part of the story. As for the writing, I’ve had to read and re-read to get my head around what seems to be your most profound demonstration of dream sequence logic to date. Very elegant and sparing text, which makes far less sense when read the second time. A phantasmagoric flow that produces temporal amnesia in the reader. Anyway, thanks so much for this. I’m still quite an avid comic reader, but I don’t have anything else as delightfully unhinged in my collection (apart from your other work, that is!).”