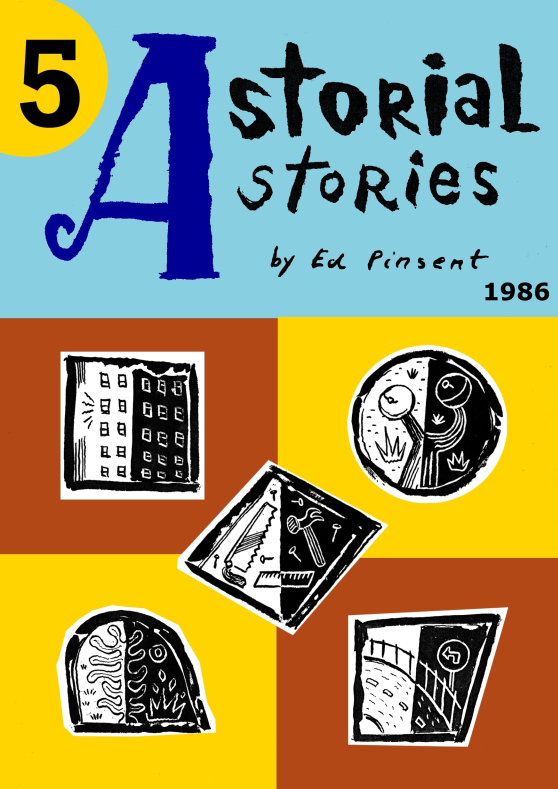 Here you can download a PDF containing all five of the original Astorial Stories. This is one of many books formerly available on Scribd.

These five stories were written and drawn fairly quickly over a few months in 1986. I had just moved to London and was finding the experience of living in a new place slightly daunting. I felt much like the young Brighton in the first story, finding the shirt he was expected to wear was much too large for him.

To comfort myself slightly I returned to something familiar to me: the imaginary world of the enormous Astorial Hotel, which had first come to me in an ongoing series of prose stories I’d written in my late teens. The Astorial Hotel as I’d conceived it was this impossibly large building where anything could take place, strange characters lurked everywhere, and the idea of “indoors” and “outdoors” often got confused. There was also a strong symbolic subtext to those original stories, quite often bordering on Christian allegory.

These elements I summoned up to create the five skeletal comics you now have before you. It was the first time I’d provided visuals for the imaginary Hotel, although I knew precisely what the invented Astorial Flower would look like (something like a cross between a thistle and a begonia). As I scribbled away, my pen attempted to delineate the impossible perspectives and huge scale of the hotel. Along the way I found myself discovering ecological and atmospheric conditions that were quite new to me, as though the Hotel had its own eco-system and geographical terrains. Some of these environmental conditions were notably threatening; bad weather, vitrification, air pollution exacerbated by cigars, trees uprooting themselves and walking around.

The five stories turned out to be interlinked in various ways, and I provided some slightly tongue-incheek footnotes to each story that would hint at these connections. These footnotes are provided in this digital edition. The connections may not all be accurate, and some may be there to throw readers off the scent. However, two fundamental recurring ideas included the electrical power system run entirely by pastries, and the fact that almost any physical object could be used as a map with which to interpret another part of the hotel. Examples include the coach gearbox which doubles as a roadmap. I also liked using the story-within-a-story device, most notably in The Jardiniers, as a way of providing further connections.

The symbolic and allegorical elements wouldn’t go away, either. The very first image in the book is a fish, an early Christian symbol. Another obvious one (to me) is The Roof Runner, whose story shows him as The Devil chasing after a Ship of Fools, intent on their doom. Now I look at the collection again, it’s also possible to read Brighton as an innocent Adam at the birth of mankind (his name contains the letters for “birth”). His story is a coming of age tale, even including numerous heavily symbolic key images. Even the Stonecutter, a figure we barely glimpse in the third story, is a sort of Christ figure; though you may think he’s intent on wreaking havoc on the physical exterior of the building, his work is actually about remaking. Tom the Builder (the only character in the story who senses these changes will be for the good), is a misunderstood John the Baptist, crying in the wilderness.

Besides all the puzzling events, there are also two murder mysteries for readers to solve. The death of Elizabeth Innsbruck is one of them, paralleled (by the interlocked story method) with the death of Rubelia Florenzo.

The drawings were done at A4 size, with a pen and a very splashy brush (and the help of a worn-out marker pen). A lightbox was used to enable me to reposition original sketches and leave lots of white space in the finished drawings. I realise my work looks “sketchy” to many readers, and it doesn’t get more minimal than this. Yet I like to think there is enough information there for the pictures to work.