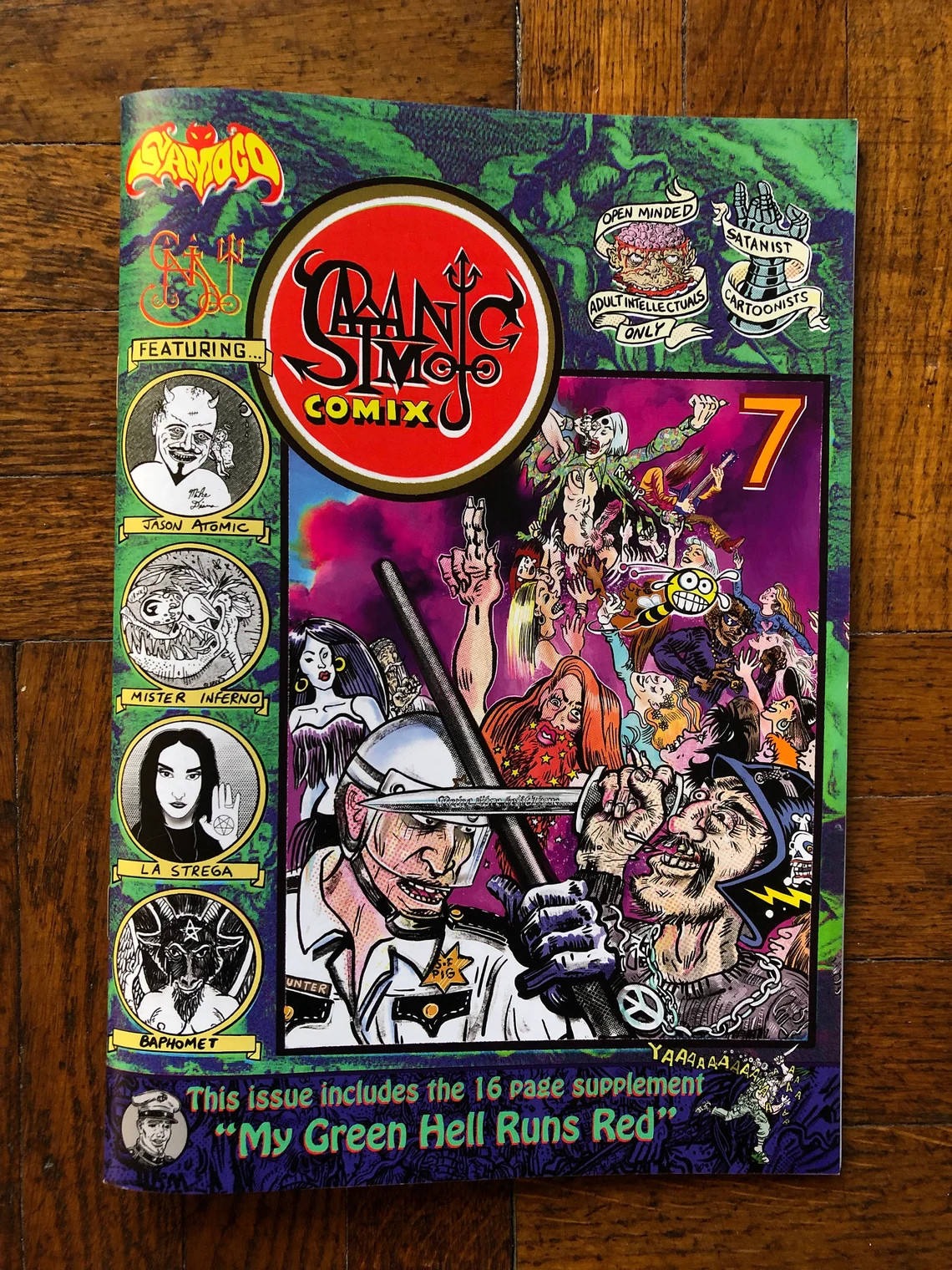 I received a package of comics from Jason Atomic in November – this was after my recent review of Ugly Mug # 6, in which he appears. So far I’ve read Satanic Mojo Comix #7, a US-sized book with a mini-comic insert. Just by looking at the cover alone you can see the E.C. Comics influence – the sidebar of heads in circles directly copied from The Haunt Of Fear and others in the EC Horror series, and also the influence of American underground comix from the 1960s-1970s in general, and S. Clay Wilson in particular. I’d thought I’d dispense with these observations at the start, because this book certainly isn’t a pastiche of some sort – it’s evident that Jason Atomic is a very distinctive and original talent, with a vivid imagination, and a gift for very peculiar story-telling. There are a number of guest contributors – Andrew Labanaris, Dennis Franklin, Sina Sparrow, Paul Boswell, Savage Pencil, Billy Chainsaw, and others – but I want to say that the book is mostly Jason’s vision. The bulk of the pages are devoted to his lengthy ‘Panhandle Pandemonium’ story, told in episodic fashion as the contributors break up the flow with adverts, one-pagers, or short strips of their own. These interventions are in fact strangely woven into the fabric of the main story, in a manner I want to describe in more detail below.

First though, I guess there’s no ignoring the “satanic” content – the book is shot through with startling images and drawings of “Old Nick”, along with other numerous instance of blasphemy, devil-worship, occult phenomena, and shocking violence, all apt to appeal to Goths, freaks, outsiders, and gore fans alike. As it happens, Jason Atomic caters to this fringe audience as co-curator of the Satanic Flea Market, a regular event which was recently highly rated by Time Out, and where curious customers can acquire Tarot Decks, tattoos, votive skulls, artworks, belt buckles, and other paraphernalia. I guess it’s this content that obliges the publisher to print “open minded adult intellectuals only” on the cover of the book, but the end product isn’t just a tribute to “Mister Pitchfork”. Rather, it speaks of a total artistic freedom in stories and art, resulting in some truly extreme and demented images, one stand-out example being the ‘Lockdown Head’ penned by Rafel Delalande. Graphically stunning with its intricate penlines, stippling, and bold use of black, it features actually no diabolic content as such, but is an instance of very extreme and violent body-horror mutation to rival The Thing movie. Compellingly horrible to look at!

The ‘Panhandle Pandemonium’ story also hints at satanic themes and undercurrents, but it has a wide thematic sweep, taking in drug culture, rock and roll, outdoor music festivals, sex and nudity, biker gangs (another S. Clay Wilson nod), mystic gurus, outsider freaks, the cinema of Kenneth Anger, and even (by way of the mini-comic insert) the Vietnam War, as refracted through the Apocalypse Now movie only made even more grotesque and violent. On one level the story could be read as a re-imagining of the Rolling Stones Altamont debacle, an event now inscribed in rock music history as having a terrifying occult significance – even Mojo music magazine once devoted an entire issue to the subject, and surveyed the year 1969 in general for other unwelcome instances of the hippie dream going badly wrong. Here, the Rolling Stones are heavily disguised and also spliced together with Led Zeppelin (known masters of backward-masking and Crowley messages in the run-out grooves). The story allows Jason Atomic to concoct some extraordinary cluttered panels – his rendering of crowd scenes is especially florid, but he doesn’t fudge a single detail – and he depicts all the clothing, tattoos and other trappings of these clashing cultures with relish and an eye for authenticity, from swirling paisley pattern shirts to sunglasses, insignia, and police uniforms. He’s got a bold style with the brush that won’t take no for an answer, and every panel sizzles with movement, action, and strange psychic energy. One might also note his penchant for very loud sound effects on the page, something which I personally love to see – so many contemporary cartoonists seem to be drifting away from using sound effects, perhaps thinking them too “cartoony”, a stylised trope which might detract from the cinematic “realism” they’re aiming for. Conversely, Jason Atomic embraces the device and exploits it for all its worth, bringing additional “noise” to his already-saturated pages. 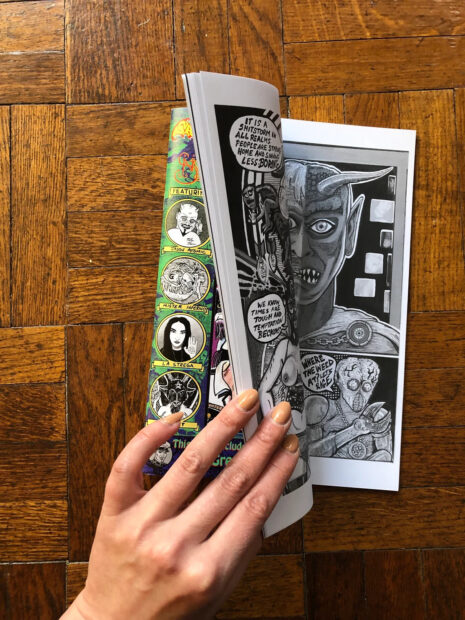 But it’s the story-structure here that I want to try and account for. ‘Panhandle Pandemonium’ is a wild roller-coaster of a narrative, fragmented into pieces, seemingly flying around in time and space in a very free-form manner, picking up the threads at unexpected points, and introducing new twists with each new character. If the author is aiming to evoke a trippy acid experience on the page, he’s come close to doing so in a way which even the original San Francisco geniuses of the 1960s couldn’t quite manage. The disorienting effect is emphasised and made stronger by the way the book is edited; every insertion of a guest page in fact adds to the main narrative, echoing it or continuing it, reflecting on themes already established. One particularly successful example is the page co-drawn and authored with Savage Pencil, where Mr Inferno suddenly appears from nowhere and inserts himself into the story, incidentally bringing in the “black acid” which results in instant mindwarp both for the hippies in the tale, and us readers. Other key “suture” points appear throughout the book. In ‘Don’t Blame Me, Motherfuckers’ by Franklin, a leering face of Satan appears immediately after the page where the hippies have directly invoked him, through a Crowley gesture and the name “IO PAN”. The arrival of the police forces is directly preceded by the collage of Captain America wearing the face of the Red Skull (by Chainsaw and Atomic), with a very timely slogan about fascism. Delalande’s hideous ‘Lockdown Head’ is facing a page of a similarly decayed and ruptured human face from the unsettling tale by Mutartis Boswell. Satanic Mojo Comix #7 defies the rules of “normal” anthology comics, by editing all the pieces together in such a way that the book appears to be one long (admittedly somewhat disjointed) story told in a single voice, as though Jason Atomic were occupying the souls of his guest creators like a form of demonic possession, and controlling them like zombies.

This said, the individual pieces all stand up by themselves; we could make special mention of the nasty ‘Paranormal Z’ by Nico T.D.M., a sick and unsettling joke where the instant decomposition of human bodies is drawn with ruthless precision by the artist; the ‘Goetia’ images of Gunsho, depicting a few choice horrors from the 72 elite demons alongside their sigils; and the wild use of halftones by Franklin, whose story manages to mash up bondage gear, satanism, witchcraft, Ed Big Daddy Roth hot-rods, and sci-fi movies in one gloriously non-linear array of blaspheming images and texts. Satanic Mojo Comix #7 has surprised and amazed this reader with its imaginative range, its ingenious mashups of many strands of underground culture, and the deliberation with which it’s been curated and assembled; that’s after one gets over the initial shock provided by so much intense and extreme imagery on offer here, art which seems to be etched into the paper like hot metal and which leaps off the page like infernal flames. This is the last issue of Volume #1 in which the creator closes one chapter and is undertaking a “new direction” with his project – I guess I’ve missed the previous incarnations! Not suitable for children, purchase with care. 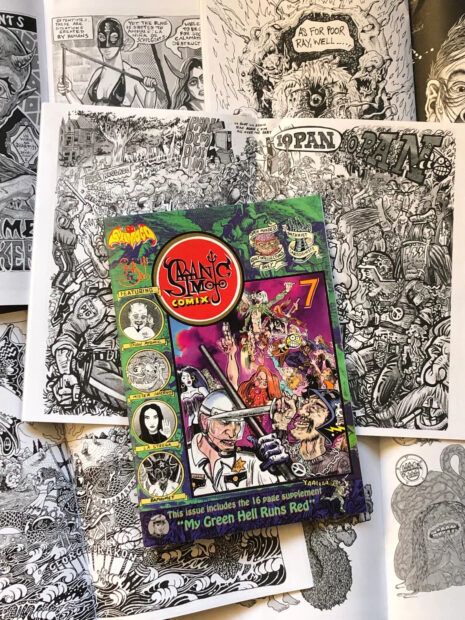 All images taken from the above link