Here’s the original art for one page from “Drake and His Dog Meet Fantômas”, an unpublished Drake Ullingsworth story from around 1997.

Fantômas is a fictional character who has long preoccupied me. It started with my love of Rene Magritte; like many other Surrealist painters, he was captivated by the character and at least two or three of his paintings are direct homages to Fantômas, either to the imagery of the pulp paperbacks that told of his exploits, or to the cinema of Louis Feuillade, who made a few episodes of a Fantômas serial in 1913. Le Barbare is one such Magritte painting, The Menaced Assassin is another.

Since then I have read two Fantômas novels in translation, bought a DVD of the Feuillade serial, and even own a jigsaw of an Italian movie poster. I would recap some salient points here about what it is that fed my obsession, but I think they’re mostly expressed in this single page.I know there was a 1960s French relaunch of the character, but it’s this early version that truly suggests the master criminal is a powerful force for anarchy that can’t be stopped, that somehow goes beyond crime into some strange dimension.

In 1997 it seemed to me like a good idea to attempt a Drake story, but it remains unpublished to this day. It turned out nightmarish, very violent, and quite horrifying; furthermore, it contains some explicit imagery of sexual deviancy and perversion which continue to shock me. I’m not sure where it all came from. It would be nice to put it in print, as I think it contains some of my best-ever inking, but…

I have shown the partially-completed story to a couple of friends. One of them said “What were you thinking?!” But he then encouraged me to finish it off, just so I could close a chapter and get it out of my system. I added typeset captions to the pages that hadn’t been lettered, in so doing coming up with a semi-coherent but still delirious tale.

More recently, Marc Baines opined that my window-cleaner story for Ugly Mug #6, which features a free spirit and a detective, has undertones of a Fantômas story. 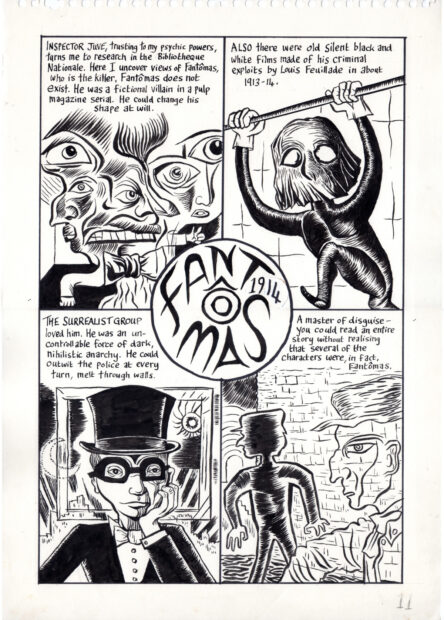